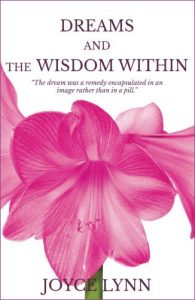 “An amaryllis adorns her desk. The beautiful, open flower is pink. Shocking pink. Vibrant pink… I want the pink flowers for  myself.

“Pink, the feminine color. Pink, the restitution of the neglected, damaged portion. Pink, the flowering of the female self, the soft side, the intuitive side,

“The dream was a remedy encapsulated in an image rather than in a pill.” — Dreams and the Wisdom Within

Part memoir, part scientific manual, part spiritual guide, Dreams and the Wisdom Within weaves a compelling narrative of the healing and transformative power of dreams.

Drawing on decades as a journalist and personal experience with dreams, Joyce Lynn outlines a three-step healing blueprint and envisions a future of health care with dreams at the core.

How Dreams Can Reduce Stress in Trying Times

Excerpt from Dreams and the Wisdom Within/Section: Dream Treatments, Chapter: Tiger in My Tank

Pressed by deadlines, Christine Lemley, a spiritual director and former hospital chaplain, prepared to travel to Greece on a summer-long archaeology trip when she had a dramatic dream: an image emerged out of black velvet.
“It was enveloping,” Lemley said. “I can’t put words to the essence of this blackness, and out of this blackness came a gold image, a female image.

“It was obviously something from antiquity, and it filled the black space in the dream and became the entire essence of the space of the dream.
“I was so taken by the exquisiteness of this gold piece of antiquity. It gave me a sense of immediate well-being and wholeness.”

The dream occurred in May 1997. Lemley was attending a silent retreat at the Abbey of Gethsemani, a monastic community in Trappist, Kentucky, but the memory still resonates with her.

“I was under a great deal of stress, and it was stress that was healed,” she recollected.
Emotional strain and mental angst can inflame the immune system and intensify susceptibility to infection and disease.

I met Lemley at a book discussion group in Louisville, Kentucky, where I spent a couple of summers near my sister, an organic farmer.

Founder of the Interfaith Forum in Columbus, Indiana, Lemley infuses her chaplaincy and spiritual directing with dream work. She is also executive producer of Dreamtime: An Integrative Health Series for the Public Broadcasting Service.

During the book conversation, I called dreams a vehicle for social change. Later, Lemley told me about her dream and the aftermath in Greece.
She was touring the Mycenaean exhibit at the National Archaeological Museum of Athens. She gasped at a gold figurine in the first exhibition case.

“It was a robust, glorious, female figure similar to the object of my dream. I stood there and wept. I see it in my being now.”

Vibrations at the locus of the ancient healing temples connected her soul with the revered object. “It was an awesome affirmation of self and Self in the context of the whole,” she ruminated.

“It was a special cosmic gift, surviving through time. I draw on the dream when I need that sense of wholeness.”

Dreams and the Wisdom Within empowers women, those most often disenfranchised by traditional medicine, custom, and mores.

“Your book surprised me. It was not what I expected. I thought it would be all about dreams. It is, but it is so much more. {You describe} nocturnal offerings, gifts from deep within our psyche, our soul. {Dreams and the Wisdom Within} is part science, part research, part memoir . . . .”  — Roberta Teller, host, Wise Woman Storytime

From primitive times through the healing temples of early Greece and the holy books of the Near East to the Age of Enlightenment when reason trumped spirituality, dreams held prominence in thriving civilizations. Historic events in the evolution of consciousness suppressed the viability of dreams, limiting their influence for generations.

Joyce revives dreams as a mandatory modality in our daily lives. She demystifies dreams and offers a contemporary approach to dreams and their essential role in our daily lives for positive health, self expression, relationships, and social change.The stories she tells extract dreams from the confines of religion, psychotherapy, and New Age customs, making dreams, studded amulets of ancient cultures, fashionable again.